I May Be Slow But I Do Poor Work…

It took a while to get rolling today but I did manage to get the workshop ship shape. Well that’s not entirely true now that I think about it, I did get shit done all day. Clothing to the Thrift Store, crap to the dump along with a few other stops in Trail, fixed the eroded edge of my driveway with a bucket of road crush (Carolyn is happy about that). Late in the afternoon I finally dismantled the front wall on the shop and fabbed up a barn door so I can drive a vehicle inside. Almost ready for action.

Some jobs around the house can be gnarly or unpleasant and get deferred for a while but you get around to them eventually. Others seem to be of marginal value and can get put off indefinitely. After a while the background clutter builds up until it becomes the normal backdrop. It takes a conscious effort to recognize this and spur action to renew and reset your surroundings. I’ve been on a tear up at the Lodge all summer cleaning, organizing, reclaiming and re-purposing various spaces around the operation. Sometimes you have to live somewhere for a few years before you get a feel for what’s right and what can be improved in your living space. Or your work space. Over the last several years I have spent more time living at the Lodge than I have at home, by a fairly sizable margin. So it’s only natural that I would get a feel for what works, what needs to change and dream about the future. What can be done to improve your scene now, where you want to go next, and what’s possible to achieve with the tools on hand . Goal, Plan, Grow. I wonder what that is in Latin.

I’ve brought this work philosophy home and have undertaken a substantial project involving the VW bus I bought a few weeks back. A 1971 Wesphalia Campmobile with a 1600 single port 4 cylinder Type-2 motor and 98,580 miles on the odometer. They max out at 99,999 then turn over to zero, no idea how many times it’s been around that block…

I have a particular affection for the era of Transporter as it was where I got my start as a quasi-mechanic and Maguyverer of broken things. One was also my home for 6 months my first summer in Whistler 1985, which was one of the  best times of my life™ but I’ll tell that story some other time. This particular bus really just kind of landed in my lap, it’s not like I was driving around town scouring the bushes looking for one. I had noticed it a few times in the past as it was parked next to Alpine Robs rental house (where we usually had some equipment parked) but never followed it up.

A month or so back, when I was throwing together Liz’s rock wall in Rossland, I had to walk the iron over to the Robs rental when I was done. On a whim, I took a few minutes take a quick look in the windows and crack the engine cover to see how blown out it was. The motor looked in good nick, the furniture and folding bed upholstery looked intact and it looked clean inside. Granted, there were some rust holes and missing bits on the rocker panels and fenders and the front fender wells were pretty blown out but I figured it could be patched up with a bit of work.

A couple of days later, through a series of coincidences and chance encounters, I found myself taking possession of this 44 year old beast and driving it home. By this time I had already decided the best course of action would be to blend the 1971 model year upgrade parts onto the 1970 bus I already had sitting in the yard (blown clutch, solid frame and chassis). Yeah, my house kind of looks like Sanford and Son… Like I said, it’s a project.

Three weeks ago I set upon the idea of driving the Rusty Westy out to Tofino so that Hillary could have a solider roof over her head as she is presently tenting it due to a lack of affordable accommodation for summer workers there. Very similar to what I faced living in Whistler 30 years ago, the parallel of our situations 3 decades apart struck me as somewhat ironic. That I could give her a similar experience to what I had, namely living is a VW bus, the ultimate Tiny House really got me going. Set the kid up for the rest of the summer and turn the shed into a shop capable of  wrenching on all my vehicles year round in the mean time, a worthy goal. 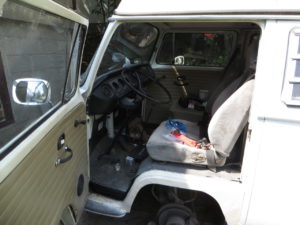 Two weekends of bodywork to rebuild the footwells and fashion new front fenders out of metal mesh, fiberglass and bondo and it’s starting to look promising. Mounted a bucket seat I had lying around and insured the thing to get a grip on drivability issues before I took it West to Tofino.

She felt like a typical bus driving around, the brakes worked awesome (those lovely front discs, the big improvement over the’70) but there was a bit of wallowing going on around corners. And going straight. Got looking for shocks and ended up getting decent gas shocks all around (the drivability improved immensely).

Up to this point I had been cautiously optimistic that my grand plan would work but I had some nagging doubts about the underbody, especially the frame.  While I was installing the shocks I found some shit that I couldn’t ignore or cover with some tin so it’s become curtains for the old girl after all.

The rot evident on the fenders turned out to be endemic through the rest of the underside and upon closer inspection, I determined to be pretty much terminal cancer. A shame as she is just 1,200 miles from turning over a new leaf and starting from zero again… All has not been lost though, I’ve had a blast driving around in the old girl, getting a feel again for what made me fall in love with them in the first place and it’s also been handy having a transporter  to haul shit to the dump.

Maybe I’ll scab it back together after I get done with the good one and give it a fitting send off, driving it till the wheels come off (a distinct possibility) but for now. Well, one thing at a time…